My girlfriend is having a Sweet 16 party in Texas on Friday night, and I’m going to have my fervent gaze fixed on her for hours. I love her. (No need to alert the authorities. I’m not breaking the law. My “girlfriend” in this instance is my alma mater.) Before her Big Dance, I thought I’d sow doubt into a USA Today article that went to seed, much like my 2013 March Madness bracket.

The NCAA men’s basketball tournament is broken down into four regions. Each region has 16 teams, seeded 1 (best) to 16 (worst). The 1-seeds are usually big-name programs from “power” conferences — teams such as Kentucky, Duke and Kansas. The 16-seeds are typically small schools from low-ranked conferences — unfamiliar (to most) teams such as Jackson State, Colgate and Eastern Kentucky. Indiana has been a 1-seed; IUPUI has been a 16-seed. You get the picture. 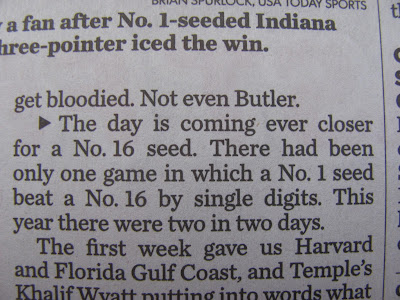 In the “Round of 64,” the 1-seed faces the 16-seed. The 1-seed, the heavy favorite, usually wins. Strike that. The 1-seed always wins. David has yet to defeat Goliath; a 16-seed has never won a game in the men’s NCAA tournament.* But it has come close on numerous occasions. This excerpt from USA Today would have you believe otherwise.

Below is a complete list of games in which a 1-seed beat a 16-seed by fewer than 10 points. Before this year’s tournament, it had happened a dozen times — not one time, as the article claims. Heck, it happened three times in 1989 alone.

Yes, 16-seeds have yet to fit into a pair of glass slippers, going an unsightly 0-116 since the tournament expanded to 64 teams in 1985, but as you can see, 16-seeds came within single digits 14 times. Two of them were a point away from perhaps writing the ultimate Cinderella story, and another made it to overtime before falling.

This near-upset information is incorrect in USA Today, and that’s what has me upset. In order to be accurate, the article would have needed some sort of qualifier after game, such as “in the last 15 years” or “since 1997.”