Out of Your League

I just heard some big NBA news: Tom Brady was traded. And you’ll never guess what happened in Major League Baseball today? According to unnamed sources, LeBron James has retired. 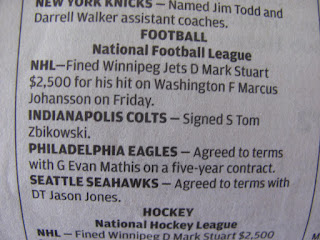 None of that makes sense, does it? Of course not. Those items are incompatible. They are, if you will, leagues apart. As is this section of National Football League “Done Deals” from my local newspaper.

Seems strange that the first transaction listed in the NFL portion pertains to an NHL incident. When I read about the National Football League, I want football news, not National Hockey League material. Silly me.

We need to drop that first transaction faster than they drop the puck in a face-off to start every NFL game.

I meant NHL game, of course. I was sporting with you.