The Mother of All Errors

Editor’s note: Today’s post was written by Future Owen, in 2030.

Kids, it was the final day of March 2014, exactly two years before your father married your mother, Mila Kunis. It was a spring day unlike any other. After too many (nine) seasons and too many (206) episodes, the legen — wait for it — dary CBS sitcom How I Met Your Mother was closing MacLaren’s for good with a two-part finale. Yes, the show made like a Connecticut winter and stuck around too long. Yes, many of HIMYM’s creative risks failed, creating a roller-coaster ride for almost a decade. And yes, I still held a bit of a grudge that Barney didn’t end up with Nora, a smart, sexy, laser-tag-playing sweetheart. Still, I anticipated the last two episodes. It was my chance to say goodbye to Barney, Ted, Robin, Marshmallow and Lily Pad … and The Mother, of course. And maybe, just maybe, I’d get an answer to a question that had always puzzled me: Why did Future Ted, who narrated the show, have a different voice from Present-Day Ted?

I had a few hours to kill before the ultimate opportunity to experience bro codes and slap bets, so I donned my ducky tie and went on 60 two-minute dates. None panned out. With another hour to kill, I decided to pen a When Write Is Wrong post in HIMYM’s honor. Little did I know it would be the springboard that propelled WWIW to levels that dwarfed Google, YouTube and Facebook by 2015.

I don’t mean to toot my own blue French horn, but like a certain Canadian pop star from the ‘90s, my March 31, 2014, post sparkled. Here’s a copy of the original. Enjoy. 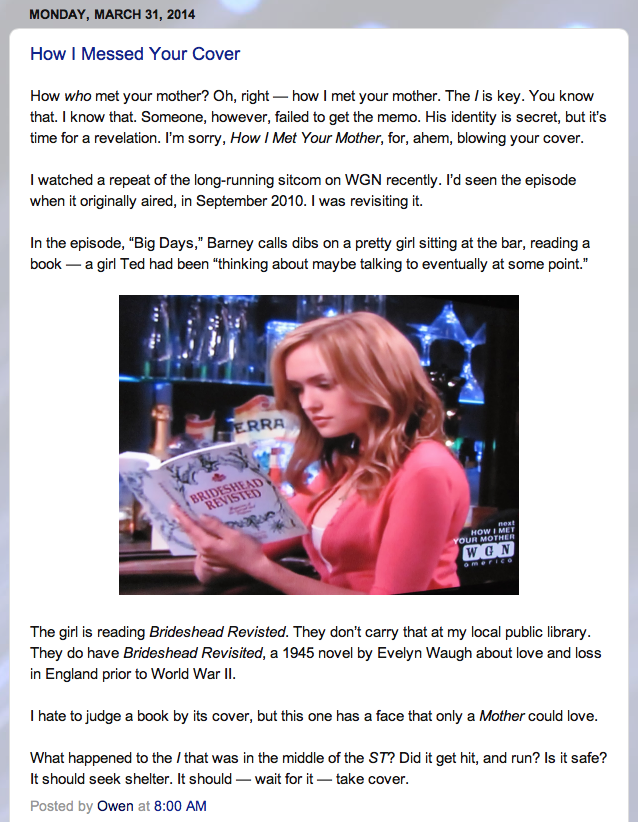