Were you aware that today is a holiday? It has been since 2008. That’s when Martha Brockenbrough, author of Things That Make Us [Sic], established National Grammar Day. It was important to her that those of us who care about words and syntax march forth (get it?) annually and spread the grammar love.

National Grammar Day has yet to reach adolescence, but the holiday is growing fast, growing strong. NGD even has its own haiku contest and alcoholic beverage. More on that to come.

Those who have a way with words can go a long way, with words. In conjugation, er, celebration of NGD, I’ve come up with a dozen things to keep in mind when it’s grammar time. Take a look at the list as I thumb through my AP style guide. I’ll be back shortly…

• Don’t literally write literally if it doesn’t work. Figuratively speaking, that drives me up the wall.

• When you unexpectedly change from past to present, or vice versa, it makes readers tense.

• A preposition can end a sentence. Those are words to live by.

• Readers do double takes if they see a double negative.

• Stay active. Strong writers use the active voice. The passive voice is used by novice writers.

• Be sure your subject and verb agree. A reader notices. Readers notice.

• Write powerfully, use powerful words and know the difference between adverbs and adjectives.

• Parallel structure creates rhythm, adds style and draws interest. You can use it. You should use it. You will use it.

• Avoid misusing commonly confused words, such as affect/effect and lay/lie. You’ll lose a reader’s trust if you play fast and loose with the English language. By the way, did you know that some people would rather cuddle than have sex? Gifted (and amorous) grammarians, on the other hand, would rather cuddle then have sex.

• Understand the difference between contractions and possessives. It’s has its place. So does its. It’s true.

If I composed today’s post properly, I did well. If I helped at least one reader realize the importance of grammar, I did good. Some good, anyway.

Oh, right, I promised additional information about the haiku contest and the adult beverage.

A five-judge panel of wordsmiths looked at 269 tweeted submissions for the 2013 NGD haiku contest, and Arika Okrent won with this entry:


Larry Kunz captured the 2012 contest with the following:

Being a dangler,
Jane knew it would have to come
Out of the sentence

And in 2011 Gord Roberts earned top honors with this three-lined, unrhymed verse of five, seven and five syllables:

These five did not win. They could have.

Wanted: one pronoun,
To take the place of he/she
“They” need not apply

Loose rhymes with moose and
Lose with booze, which I want to
Drink when they’re confused

Dear yoga teacher:
If you say “lay down” once more,
I’ll hurt you. No lie.

Conjugating through
My existential crisis
I am, was, will be

Too much haiku for you? There, there. (Their, their? They’re, they’re?) You’ll feel better after you drink a “grammartini,” a cocktail concocted by NGD’s founder, Brockenbrough. 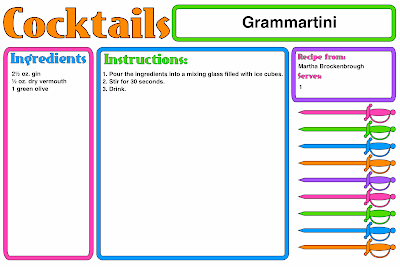 Grab your glass and check out these funny grammar-based images, which I found online. To grammar! Clink. 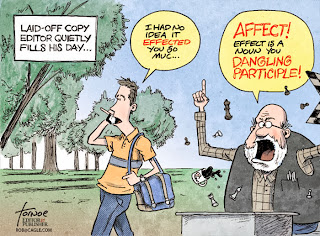 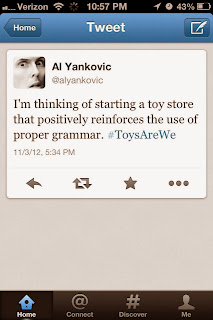 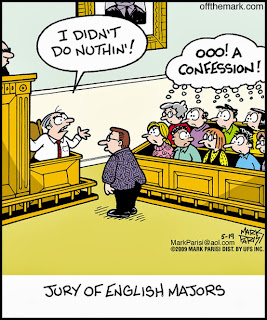 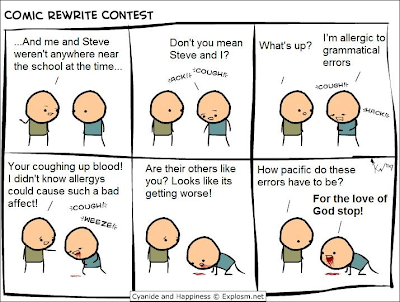 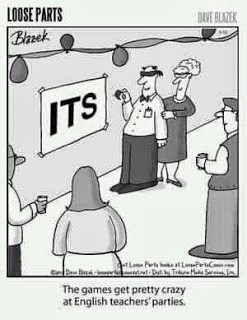