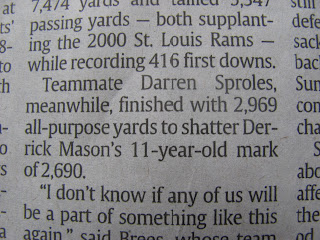 On the final day of the NFL's 2011 regular season, I spent a portion of my Sunday watching a rather meaningless Saints-Panthers game. The outcome would have no playoff implications, so the only wisp of drama involved the record books. Namely:

Well, according to the excerpt you see above, Sproles shattered the mark. Not so fast. Sproles did establish a record, but just barely. He did not finish with 2,969 all-purpose yards. The writer did a number on that sentence. Here's what really happened:

Early in the fourth quarter, Sproles' season total stood at 2,688 all-purpose yards. With less than 10 minutes to play, he took a handoff from backup quarterback Chase Daniel and rushed for 8 yards, eclipsing the old mark of 2,690, set by Derrick Mason in 2000. At that moment, Sproles — and his 2,696 all-purpose yards — headed to the sideline. His day was done. Mission accomplished.
Posted by Owen at 8:00 AM