The Four Seasons' "December, 1963 (Oh, What a Night)." My handheld Mattel Electronics football game. Betty White. I'd classify all three as oldies but goodies. Here is the brief tale of two more items that deserve similar recognition.

I found — make that found again — two typos while doing some cleaning and organizing at my parents' house earlier this year. When I lived in Florida years ago, I sent my family clippings from time to time. Turns out, my mother, whose DNA lacks a "we can get rid of this" gene — held on to all the clippings. When Write Is Wrong thanks her, for two reasons.

Here's the lowdown on the first... 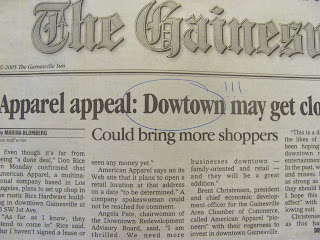 In late 2005, Gainesville, Florida, was in the midst of a downtown revitalization. Changes were abundant. Famous apparel companies coming, popular letters leaving. The n in The Gainesville Sun's above-the-fold headline made like the local pub-hopping college kids shortly after last call and departed downtown. I hate to come down on The Gainesville Sun, but a front-page headline with an n out of downtown is a down-and-out headline.

And here's the anatomy of the second... 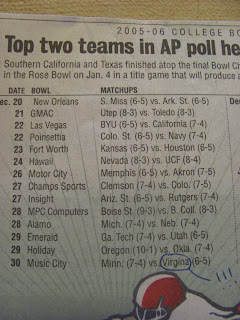 For space purposes, team names often have to be abbreviated in a publication. Colorado State becomes Colo. St., Michigan becomes Mich., and Virginia becomes ... well, in this case, it becomes a slightly dirty, unintentionally funny Virgina. This was no attempt to abbreviate the word Virginia, of course. It was merely a muffed spelling, albeit one that elicits a tee-hee.
Posted by Owen at 8:00 AM