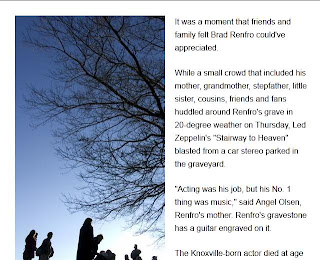 Pictured here is a portion of a story, posted on Knoxville.com in January 2009, about friends and family marking the one-year anniversary of a young actor's death. My friend Lindsay, of IAMNOTASTALKER, tuned me in to this one. Thank you, Lindsay.

I'm reading the image Lindsay sent. Looking good, looking good... There doesn't appear to be — stop the music! There it is, near the end of the second paragraph. See it?

The stereo in my beat-up '93 Accord is unable to read CDs anymore, and its AM/FM playback is replete with static and crackling, yet the stereo I'm reading about in this article has the ability to detach from its carcass, if you will, and self-park. Impressive!

When I looked at the full online article, it had five reader comments, including this one from someone identified as EducateNow:

Glad to hear the car stereo was parked in the graveyard. Wonder where the rest of the car was?

Despite EducateNow's remark, which was posted the same day the article appeared, a correction has yet to be made. On the Knoxville website, that car stereo remains parked in the graveyard. I wonder if the strains of Led Zeppelin still echo in the cemetery trees.