My mom loves Cape Cod. It's her favorite vacation spot, ranking slightly ahead of Michigan's Mackinac Island. She visits the Cape on an almost-annual basis, and she is on the mailing lists of many Cape Cod businesses. One of those establishments, Red Cottage Restaurant, e-mailed Mom a couple of days prior to Thanksgiving. I'm calling out the restaurant, located in South Dennis, for a dozen reasons. 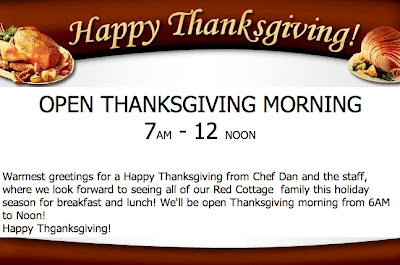 1. Why is a.m. necessary after the 7? The line above it notifies us that these are morning hours. If you omit a.m., we're not going to think it's 7 p.m. If you want to keep a.m., delete morning in the preceding line.

3. Wouldn't it be better if greetings were replaced with wishes in the first sentence?

4. Why is happy capitalized in the first sentence? Would you capitalize happy in the sentence I am a happy person when the Gators win? Of course not.

5. The first sentence's clause, which starts with the word where, doesn't work. What is "where we look forward to seeing all of our Red Cottage family this holiday season for breakfast and lunch" modifying? As written, that clause modifies "Chef Dan and the staff," and that doesn't make any sense. Ending the first sentence after staff, deleting where and beginning sentence No. 2 with we would be one solution. Others exist.

6. Why the extra character space between Cottage and family? Aren't we supposed to come together during the holidays?

7. Not technically an error, but I don't think the first sentence deserves an exclamation point. A period will do.

8. A minor problem in the second sentence is the capital N in noon. Why? It's not a proper noun.

9. A major problem in the second sentence is the conflicting information. At the top of its e-mail announcement, Red Cottage alerts us that it'll be open from 7 to 12, yet two lines later we've gained an hour. Do you open at 6 or 7 on Thanksgiving? Perhaps we can split the difference and open at 6:30.

10. Delete morning or a.m. in the second sentence. For a more detailed explanation, see No. 1.

11. Not technically an error, but I don't think the second sentence deserves an exclamation point. A period will do.

12. Take a gander at the last word. You've got one too many g's in Thanksgiving, Red Cottage. Geez!