It’s been a week. Against your better judgment, you’ve probably consumed much, if not all, of the leftover candy in the bowl by the front door. Your costume has been mothballed for another year, another party. Thoughts have shifted from carving pumpkins to carving turkeys, from haunted houses to crowded houses. (Here come the in-laws!) Not for all of us. 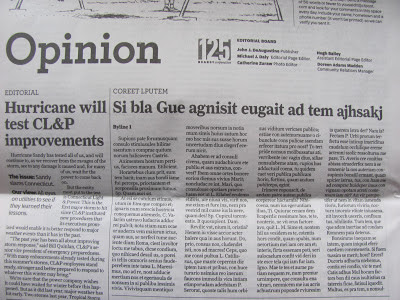 Today, Nov. 7, is Halloween in Fairfield, Connecticut. Well, it was, until it was pushed back to Nov. 10. More on that to come.

Have you heard the theory that if a monkey typed at random for an infinite amount of time, it would almost surely produce works of Shakespeare? What’s pictured at right, I suppose, is a simian first draft of King Lear.

What you see here on the Opinion page of the Connecticut Post is an example of dummy text, which is gibberish filler text used as a space holder until final copy (for headlines, captions, articles and so forth) is ready.

Don’t judge the Post too harshly for its production error. Put yourself in the newspaper’s Sandy shoes. The gaffe occurred the day Hurricane Sandy, the 800-pound (and 800-mile-wide) gorilla of a storm, pummeled southwestern Connecticut. I was surprised the daily paper even went to press, considering Sandy’s ability to cease operations. Her “closing speed” was as swift as her winds; she shut down roads, businesses, schools, airports, railroads, subways, the New York Stock Exchange, an NBA season opener and, after much backlash, the New York City Marathon.

New Jersey and New York bore the brunt of Sandy’s wrath, but Fairfield, where I live, was not immune to her fury:

• More than 95 percent of the town (population: 60,000) lost power. A week after storming out, Sandy continues to be a monkey on our back: More than 1,500 residents remain powerless.

• More than 300 toppled trees (some on houses; others on automobiles) and downed wires dotted neighborhood streets, which are currently patrolled by National Guard members.

• Houses built on sand, it turns out, had no chance against Sandy. Beach homes just down the road were washed out to sea. The image of one such house, adrift in Pine Creek with only a portion of its gable roof visible, won’t soon be forgotten.

My family was fortunate. Despite living only a mile from Long Island Sound, we suffered no flood damage. The strong winds destroyed our backyard arbor, toppled a small shed and knocked a pair of 10-foot tree branches harmlessly onto the lawn. We lost power for 65 hours and 50 minutes, but who’s counting? No electricity. No heat. No fun.

While folks in the tri-state area are in the midst of picking up the pieces, literally and figuratively, in Sandy's wake, word comes that a nor’easter is headed our way this afternoon and into tomorrow, bringing with it a mix of snow and rain, high winds and lower temps. As a safety measure, town officials in Fairfield have proactively moved Halloween celebrations from today to Saturday. The pending storm is an unwelcome development for an already battered and weary Northeast.

Haven’t we weathered enough? If I lose power again, I may have to outsource my When Write Is Wrong posts. I know of a few monkeys looking for work. To see if they take their monkey business seriously, I’m giving them a test run. I’m allowing them to compose the closing paragraph of today’s post. If I find some hidden gems in their work, they’re my go-to primates, should the need arise.