This Is a Problem 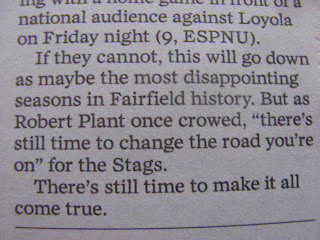 A pronoun is a substitute for a noun. The noun to which it refers, known as the antecedent, must agree with the pronoun in number (i.e., singular or plural). The word this, when used as a pronoun, is singular (the plural form is these) and thus must refer to a singular noun.

Examples (with antecedents in bold):


This is the blog that excites the masses.
This may be the greatest sentence ever written.
If I die in two seconds, this will be an incomplete post.
This represents the last example you will receive.

In the photo above, we have a pronoun-antecedent disagreement. The singular noun should be season. This season. These seasons.

As Robert Plant once crowed, "Many is a word that only leaves you guessing."

Any guesses as to why the writer used seasons?