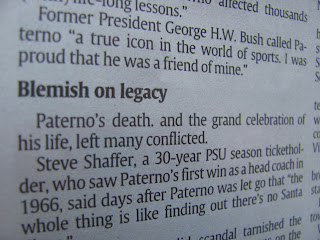 That one-word opening is a sentence. A short sentence, to be sure, but a complete sentence nonetheless. (The subject, you, is implied.) If, as shown, a sentence can be as succinct as a single word, it goes without saying that a sentence can be two words long.

To have a sentence, we need to have a verb and a subject (stated or implied), but we also must have a complete thought. If both conditions are not met, we have a fragment.

That fragment serves a purpose. I used it to get my point across. As such, it’s acceptable under the unwritten “matter of style” rule. Fragments formed accidentally are not acceptable. Fragments such as “Paterno’s death,” for example.

Granted, this particular fragment is not an indication of poor writing but merely the result of inserting a period where a comma belonged. The reason is secondary. Our primary concern is to avoid groups of words masquerading as sentences.