The Case of the Little T 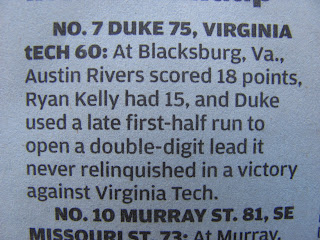 Not to get too “tech”-nical, but we have a case of t abnormality. The alphabet’s 20th letter is guilty of identity inequality, and that’s a pity. The style selected by this newspaper for team names is obviously ALL CAPS, yet we have an itty-bitty t where an uppercase T should be. We haven’t reached capital-offense status, but this (letter) case merits a blog post nonetheless. Where’s your conformity, t? Join the upper crust. Go on, get uppity. That’d be terrific with a capital T.

On a separate note, I’d like to congratulate the University of Florida women’s gymnastics team, which on Saturday evening in Los Angeles came roaring back from a couple of falls on the balance beam to capture the program’s first national championship. Of the Super Six teams, my alma mater was the super-est. You floored everyone with your record-setting floor exercise, Florida. You leapt closer to the promised land on vault, Florida. You were the best, bar none, on bars, Florida. You are the best, Florida! I hope your performance, personified by a never-say-die attitude, a fighting spirit and an aggressive approach, is a blueprint to be followed by the other Florida teams that have come close to reaching the summit but have yet to do so: baseball, softball, volleyball and lacrosse. GO GATORS!
Posted by Owen at 8:00 AM