That's Quite a Spread

Trust me, that point spread for the Utah-Los Angeles game is not correct. Even if the top NBA team were to host the league's worst squad, you'd be hard-pressed to find a point spread of greater than, oh, 20 points.

One of the most lopsided games in recent NBA history took place in February 2010, when the LeBron James-led Cleveland Cavaliers, with a 22-3 home record, hosted the New Jersey Nets, who were a woeful 1-26 on the road. The Cavaliers had won 11 in a row and had the NBA's best record. The Nets were on a six-game slide and had the league's worst record. Were the Cavaliers 36.5-point favorites? Not even close. The oddsmakers favored Cleveland by 16 points.

I'm betting (pun intended) the spread for the Jazz-Clippers game was 3.5 points, not 36.5 points. 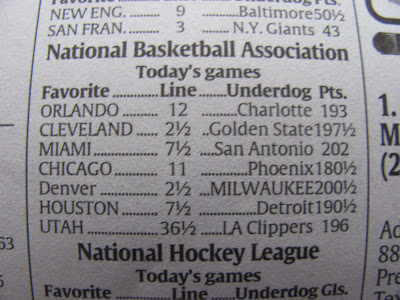 Come to think of it, a point spread of 3.5 for that January 2012 game makes sense. Entering the contest, Los Angeles was 7-3 and riding a three-game winning streak, and Utah was 8-4 and had won two in a row.

The irony is, the Jazz not only defeated the Clippers at home for the 16th consecutive time since 2003 but also almost managed to cover this erroneous, outrageous point spread. Utah beat Los Angeles 108-79.