Despite living in southwestern Connecticut — roughly midway between New York and Boston — I’m a Philadelphia 76ers fan. Always have been. During my formative years, the ample afro and aerial acrobatics of Julius Erving, one of the NBA’s biggest stars, captivated me. I rooted for Dr. J and his team — and I never wavered. I was a Sixers supporter when Charles (Barkley) was in charge, I was a fan during the dark days before Allen Iverson became “The Answer,” and I’ve maintained my allegiance through all the mediocre (at best) seasons since. It hasn’t been easy, but I’m not about to jump ship. Loyalty, thy name is Owen. (It would be nice, granted, to have that loyalty repaid with a first title since 1983. Hint, hint.) 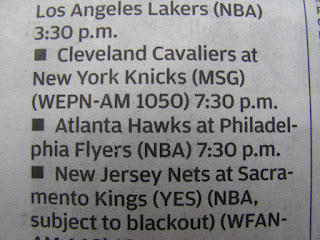 The 76ers aren’t one of the NBA’s glamour teams. The Lakers, Heat and Bulls, among others, are nationally televised more times in a week than my Sixers are in an entire season. So when Philadelphia does make a rare TV appearance, it’d be nice if we didn’t have a fly(ers) in the ointment.

The 76ers and Flyers, Philadelphia’s NHL team, have a lot in common. Both play in the same city — in the same arena even. Both have centers and forwards making millions of dollars. Both have failed to win a championship in the last 30 years.

They are not, however, the same team, and that’s why I am hotter than the thinly sliced beef in a melt-in-your-mouth Philly cheesesteak from Pat’s King of Steaks or Geno’s Steaks. Why have the 76ers been eighty-sixed in the listings? Fly away, Flyers. It’s time for my beloved 76ers to shine!