I’m reporting a cybercrime in a USA Today cover story about Arnold Schwarzenegger, the bodybuilder turned actor turned governor turned adulterer returned actor. It’s more than a crime, in fact. It’s an act of terrorism. An r has gone “Commando,” taking off without any support and muscling its way in where it doesn’t belong. See those “Twins” after the o? Wrong spot. The back-to-back r’s belong before the o. After the o comes the solo — the solo r. 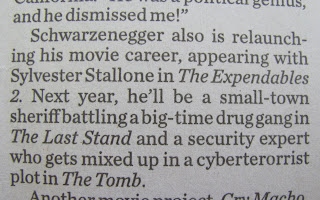 According to “The Rundown,” all r’s were present and accounted for, but one of ‘em was in the wrong “cyberspace.” As a result, terrorist became terorrist. That’s teribl— That’s terrible. Not nearly as terrible as fathering a child out of wedlock with your housekeeper, though that’s a story for a different “Judgment Day.”
Posted by Owen at 8:00 AM