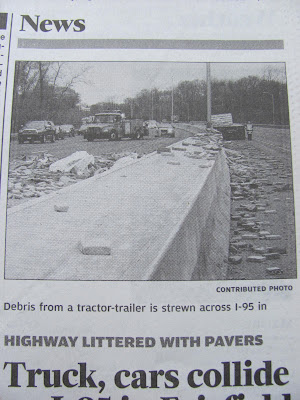 Someone doesn’t understand the ins and (left) outs of caption writing. It’s unfortunate that this photo caption wasn’t littered with another word or two. The writer exited the highway before reaching his destination, and this bump in the road is taking its toll.

Something has been left out after in. In case you’re curious, debris from the tractor-trailer was strewn across I-95 in Fairfield, Connecticut — my hometown. Without adding some finishing touches to the caption, however, the pieces of pavement could have been anywhere along the East Coast. Interstate 95 runs for more than 1,900 miles, from Miami all the way north to the Canadian border in Maine, and passes through more states (15) than any other highway.

When writing about an interstate where you’re apt to see both alligators and black bears, it would help readers if you pinpointed your position at the end of the line.