Nothing to Write Homes About 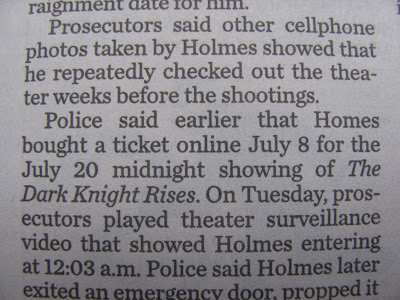 If you’ve attended elementary school or watched Sesame Street, you are likely familiar with the “What Doesn’t Belong?” game, which aims to boost classification and identification skills. Students (and Sesame Street viewers) are shown multiple items (usually four) and must identify the one that has no connection. Perhaps you recall the tune from Sesame Street’s “One of These Things” segments:


Now that you’re familiar with the game, try to figure out one more:

Did you get it?

All four look alike. But wait. Upon closer inspection, it’s clear that one Homes in this cookie-cutter development stands out, for the wrong reasons. Another letter should reside in that Homes. In this article about the madman who allegedly murdered 12 moviegoers in Colorado in 2012, all surname references should be Holmes, not Homes. That’s elementary, my dear readers.
Posted by Owen at 8:00 AM