Sometimes you can have your cake and eat it too. Today's article highlights my alma mater and contains a typo. That's the best of both worlds for this Gator editor. 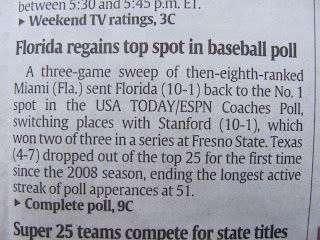 As the article states, Florida swept in-state rival Miami to climb to the top of the national baseball rankings. Things are not always as they appear, however. I don't think the No. 1-ranked Gators will capture a first-ever College World Series crown this season. In fact, I'm quite confident they won't. Sigh.

Florida has made seven College World Series appearances, twice finishing as the national runner-up (2005, 2011). The 2012 Gators are, by all appearances, on track to make CWS appearance number eight great, but, as mentioned, appearances can be deceiving. Speaking of which...

The appearances in the last sentence of the article that appears above appears to be missing its second a. That can be remedied with a simple insertion. Oh, how I wish a similar quick fix existed for the "almost" Gators.
Posted by Owen at 8:00 AM