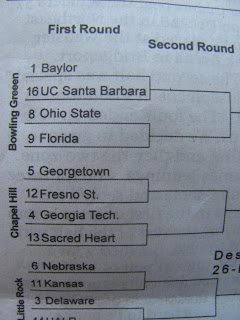 My NCAA tournament brackets are often busted far too soon — sometimes after the first weekend. In 2010 and 2011, my brackets went bust faster than Bernie Madoff investors. This 2012 women's bracket was busted long before I put my picks to paper. Don't blame me, then, for the busted bracket. Blame e.

I was bowled over when I noticed, in the upper-left corner, that some first-round games are being played in Bowling Greeen. That extraneous e needs to make like the car in front of me when the light turns green and go. But go where?

I have just the place. That extra e doesn't even have to leave the comforts of this very bracket. Head down to the lower-right corner. It is there that an e in a certain "Wash." city has washed out. 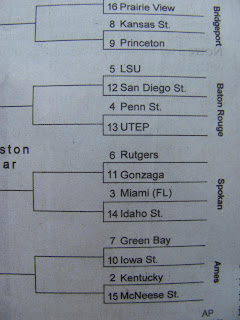 When spoken, Spokane — despite what you may have heard — sounds the way it's written on this bracket. I'm a lifetime East Coaster, and even I know that Spokane is pronounced spo-CAN, not spo-CANE. It does not rhyme with cocaine. It sounds much more like a rhyme for Coke Ann, actually. You can listen to a pronunciation here.

That being said, Washington's second-largest city is spelled with an e on the end. A silent e, sure, but a necessary one.

By repositioning one letter, we can fix the brackish parts of this bracket and return to a state of e harmony, if you will.