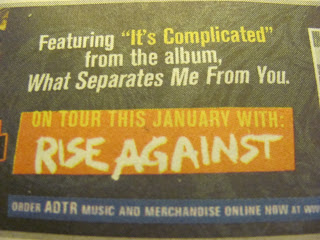 This is an advertisement for an album by a Florida-based band called A Day to Remember. Songs on the 2010 album include "It's Complicated," "Better Off This Way," "Out of Time" and "All I Want."

All I want is to know why a comma has been placed after the word album.

Let's try a couple of examples.

I am going to purchase the award-winning album Thriller. (No comma, because many albums have won awards, and without the name of the album the reader would not know which album was meant.)

I am going to purchase Def Leppard's 1987 album, Hysteria. (Only one Def Leppard album came out in 1987. The name is informative, but even without it no other album could be meant.)

Does it make sense now, or is it complicated?
Posted by Owen at 8:00 AM