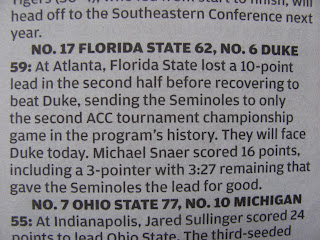 In the world of college basketball, no middle ground exists when it comes to Duke University. The Blue Devils tend to elicit a "love 'em or hate 'em" reaction from fans. Sorry, Duke supporters, but I fall into the latter category. To this blogger, Duke is a four-letter word. I have my reasons, which include (but are not limited to) the following:

• The media hype. Is a Duke game — even a "big" one against, say, Presbyterian — not nationally televised? Turn on ESPN between November and March and the odds are in your favor that a Duke game will be airing ... and that Dick Vitale (aka "Dukie V") will be one of the announcers.

• The calls. If a whistle blows during a Duke game, chances are the call is going against the other team. I haven't dug into the record books for verification, but I'm quite certain that, more often than not, Coach K's team makes more free throws than the opponent attempts. The referees aren't pulling for Duke, I'm sure. It only seems that way.

• The flops. This relates to the point above. Flopping occurs in basketball when a defensive player, in an attempt to get the referee to call an offensive foul, theatrically falls to the ground despite not establishing legal guarding position. Trying to draw a charge is done at all schools. It just happens far more often, or so it seems, in Durham, North Carolina, and the scenario tends to play out as follows: Opposing player has Duke defender beat. Opposing player drives toward the hoop. Duke defender slides underneath the opposing player at the last second. Duke defender hits the floor hard, as if shot, despite little or no contact. Referee blows whistle. Referee calls a charge on the opposing player. Sigh. I consider this "technique" a lazy attempt to get around playing tight, tough defense.

• The results. Despite being the favorite, the Blue Devils often lose to Florida State, the one team on their schedule that I want them to defeat each season. (Need proof? See the subject of today's post.) Damn you, Duke!

In many regards, Duke seems to get the preferential treatment, the benefit of the doubt, the calls. But, contrary to what the second sentence of the pictured sports blurb leads readers to believe, not even mighty Duke has the ability to lose a semifinal tournament game and advance to the championship. I'm aware of no such Duke addendum existing in the ACC basketball bylaws. Florida State will not face Duke today. Florida State beat Duke. (Of course.) Duke is eliminated, and there is nothing Vitale or the referees can do to change that.
Posted by Owen at 8:00 AM