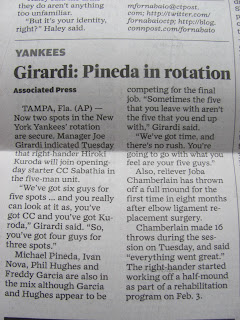 Here's the pitch and ... it's missed its mark. The headline writer has thrown us a curve. In the pitched battle to secure a spot in the New York Yankees' rotation, it was not Pineda who was named a starter. Tell that to the headline writer who is throwing names around like a party crasher tweeting from the post-Oscars Governors Ball. In this case, the "headlining act" should have been Kuroda (first name: Hiroki). That's strike one, headline writer. Two more and you're out.

I'm making a pitch for writers to stop filling our heads (our "heads" — get it?) with false information. Head back to the start and toss Pineda into the trash and Kuroda into the headline. Don't make me bring in a reliever.
Posted by Owen at 8:00 AM