A Chronicle of Errors 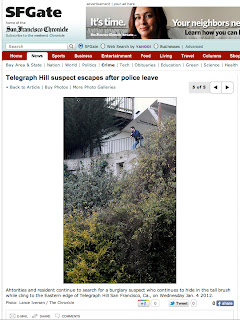 John, a reader who submitted a birdbrained typo back in 2011, noticed multiple errors in a photo caption on SFGate, the online version of the San Francisco Chronicle. He was curious if I could spot the same ones. Well, here's what I found, John.

Three of the errors I'd label glaring. 1. Misspelling authorities at the start of the sentence. 2. Omitting an s at the end of resident. (Or failing to insert the word a before resident, if it was but a lone resident involved in the search.) 3. Failing to add an –ing to the end of cling.

Those are just the biggies. Here are some of the other errors I noticed:

• There is no need to use continue and continues in the same sentence. It's redundant. I would have reworded that portion to something along the lines of "Authorities and residents continue to search for a burglary suspect who is hiding in the tall brush..." or "Authorities and residents search for a burglary suspect who continues to hide in the tall brush..."

• Eastern should not be capitalized. When terms like this indicate compass direction, lowercase them. Capitalize them when they designate regions or are part of a proper name. (Examples: the western end of the island; a Southern accent; the Eastern Shore)

• How about putting an in between Hill and San?

• Ca. is not correct. The caption writer should have used the abbreviation Calif. If he or she wanted to use the two-letter postal abbreviation, it should have been CA, with no period. The best approach, however, would have been to forgo any state reference. San Francisco is a well-known city that requires no state reference in datelines, body text and so forth — especially when it appears in a San Francisco-based publication!

• A comma is used to separate a day of the week from the rest of a date, so the writer should have inserted a comma after Wednesday.

• When a phrase refers to a month, day and year, the year must be set off with commas. That means we're missing a comma after 4.

One short photo caption, nine errors spotted. Did I miss any, John?