Following the NBA's 1981-82 regular season, reigning MVP Moses Malone parted the red-hot city of Houston and headed east to Philadelphia. His exodus weakened the Houston Rockets, but in Malone's first season with the Philadelphia 76ers (this blogger's favorite NBA team) he reached the Promised Land, leading the Sixers to an NBA championship. Malone was named MVP of the regular season and the NBA Finals. To date, he is the only NBA player to win the MVP award in consecutive seasons with different teams. Not too shabby. 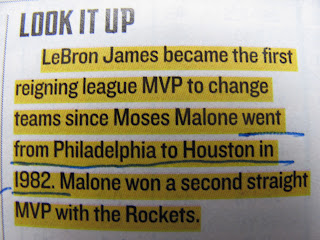 One — especially one who writes for an NBA publication — need not be a prophet to tell the story of Moses accurately. The editors of the 2010-11 Sporting News pro basketball yearbook used "Look It Up" as the title for their Malone-based factoid. Had they looked it up — or asked this Sixers supporter — they would have learned that Malone went from Houston to Philadelphia, not vice versa.

I command thee, Sporting News: Thou shalt not bear false information against thy readers.