Your Awful Postseason Means You're Terrible

This month bore the Great Depression. What, you thought it started 83 years ago? No, no, no. I’m talking about a crash of a different kind. I’m talking about the New York Yankees’ offense, postseason version. The “vaunted” Yankees led the American League in home runs, total bases, on-base percentage and slugging percentage and were second in runs scored during the 2012 regular season, but once the playoffs started, the offense crashed like an October 1929 stock market. While getting swept by the Detroit Tigers, the Yankees suffered through Black Tuesday (Game 3 of the American League Championship Series, or ALCS) and Black Saturday (Game 1), Black Sunday (Game 2) and Black Thursday (Game 4).

The Yankees never let their bats out of the cave, hitting .188 — the worst team average in Major League Baseball history in a single postseason (minimum seven games). For a 20-inning stretch during the ALCS, the Yanks, like new pantyhose, had no runs. They failed to score in the first five innings of any of the four ALCS games, and they never held a lead. Robinson Cano, the team’s best player, endured a 0-for-29 slump and finished 3 for 40 (.075). Curtis Granderson went 3 for 30 (.100) with 16 strikeouts. (Did I spell Granderson wrong? His name doesn’t look right without a few K’s in it.) Nick Swisher, Russell Martin and Eric Chavez combined to go 10 for 77 (.130). Overall, the team had about as many hits as Right Said Fred.

When the Bronx Bombers bombed offensively, however, Alex “A-Rod” Rodriguez was the lightning rod for the fans’ discontent. That makes sense, for a few reasons:

1. He struggled in the playoffs, going 3 for 25 (.120) with zero extra-base hits, zero runs batted in and a dozen strikeouts. With runners in scoring position, he was a robust 0 for 10. His futility got him benched in three of nine postseason games.

2. He signed a 10-year, $275 million contract in 2007, making him the highest-paid baseball player ever. He’s paid BIG money to perform, and in the Bronx performance is measured in ring sizes. The World Series ring is the thing — the only thing.

In the midst of this ill-timed, team-wide slump, Rodriguez spoke to reporters about his much-dissected postseason struggles. When asked about being dropped from the Game 4 starting lineup, he described the situation as disappointing and said, “You’ve got to accept being a cheerleader and also make sure that you’re ready when your number’s called.”

That’s what he said. That’s not the way ESPN transcribed it on the network’s scrolling ticker. This mistake almost got by me. But the ticker isn’t a fastball, and I’m not Alex Rodriguez. 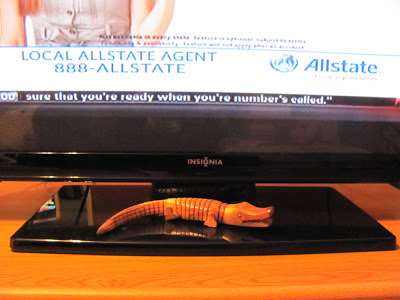 You’re, you see, is a contraction, short for you are. Your, on the other hand, is an adjective, functioning as a possessive. You’re not familiar with the differences, ticker typer. Keep failing at your job and, like A-Rod in a clutch moment, you’re out!

Perhaps I’ve been a tad harsh on Rodriguez in today’s post. Allow me to reply to such charges in a way A-Rod and all of his teammates can relate: