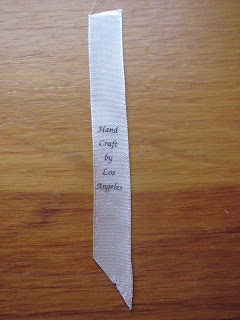 My friend Lindsay, of IAMNOTASTALKER, sends me greeting cards from time to time. For the Millennials reading this post, a greeting card is a piece of folded paper or thin cardboard that bears a message and is sent via an agency called the U.S. Postal Service. Sending a greeting card is a thoughtful albeit lengthy process that requires a writing utensil, some sort of paper stock and a stamp.

A Lindsay card often includes added bonuses, such as magazine clippings, funny magnets or other goodies. One such goodie is the item you see here. It's the tag from a sweater Lindsay purchased. "I don't even know what to say about this one!" she commented in the card. I'm with you, my friend.

The tags on the articles of clothing I own usually begin with a verb, so it is with just a tinge of uncertainty that I declare the maker of this particular tag was looking for the verb handcraft, which is one word.

The verb-starting clothing tags in my possession also happen to be in the past tense. I paused just now to rifle through my closet, and here are some of the tags I found:

So, taking things a step further, I will make the assumption that the tag maker would have preferred the past tense of handcraft, which is handcrafted. That gives us the following revised tag:

Much better. But not perfect. We've handled the spelling and tense issues, but that doesn't iron out (clothing pun intended) the tag's ambiguity. Who made Lindsay's sweater? According to this tag, Los Angeles did. As Lindsay asked in the card, "Do you really think the entire city of L.A. got together to handcraft the sweater for me?" The City of Angels has about 3.8 million inhabitants. If fashioning a sweater were a 3.8 million-person job, our nation's unemployment rate would not be hovering around 8.5 percent, that's for sure.

The line in this tag reminds me of the tagline in Lake Placid: "Part mystery. Part thriller. Parts missing."