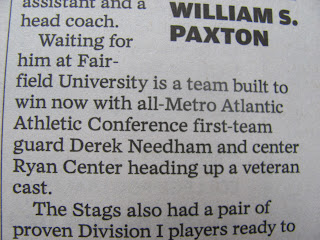 Shhhhhhh! Come closer. I'll let you in on a secret. I've been chosen to select a basketball squad that will compete in the Greatest Ever Tournament. It's open to all NBA players, past and present, and through the use of rather hush-hush technology, each player will be represented in his peak, playing-days form.

I'm in the early stages of the process, still weeding out the wannabes. My backcourt currently consists of His Airness, who is the greatest player of all time, and the point guard who led the Showtime-era Lakers to five titles in the '80s. In the frontcourt I have Dr. J and Sir Charles, despite his stiff Saturday Night Live performances. Manning the middle is the big guy who claimed to have slept with more than 20,000 women. My lineup reads as follows:

Pretty good team, huh? What, you haven't heard of any of these retired NBA players? But they're famous! The best of the best! Did I do something wrong? (Editor's note: Owen paused here to take another look at what he had written so far. He spotted his wrongdoing.)

Oh, now I see. I slipped into a bad habit I picked up from the Connecticut Post writer whose work is pictured above. I replaced players' last names with the positions they play. Fairfield University does not have a Ryan Center on its roster. It has a Ryan Olander, who plays center. You may even remember him from his appearance in a previous post. It seems if Ryan Olander is the flame, errors are the moths.

I apologize to my readers for giving the players on my team a bad name. That's not a position in which I want to be. Here, then, is my corrected lineup:

Stay tuned for the aforementioned Greatest Ever Tournament, in which my team will undoubtedly make a name for itself.