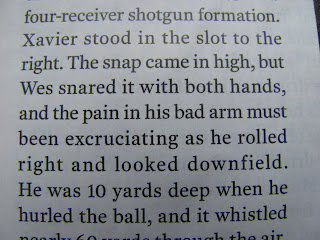 I'm rolling right and looking downfield, but I don't see have. We're in the closing minutes of a big game, and have has disappeared. The cornerback is blitzing. I've stepped up to avoid him, but the pocket is collapsing. I'm running out of time. Where's my go-to receiver? Have you seen have? We can't take a sack, so I'm going to air it out and hope for the best. The ball's in the air, it's arching toward the back corner of the end zone and it's ... it's ... incomplete. Just like this Sports Illustrated sentence. I have had it with have.
Posted by Owen at 8:00 AM