National Lampoon’s Christmas Vacation, one of the fun-fun-funniest holiday movies out there, opens with a cartoon. As the credits roll, we hear the catchy “Christmas Vacation” by Mavis Staples and see an animated Santa holding a check-marked list of last names. 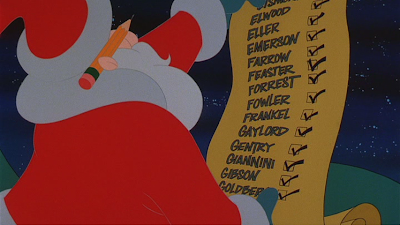 He made a list. I’m checking it twice. I just found out that something’s not right. Like an elf on an NBA court, Elwood is in a place he doesn’t belong. You don’t need Rudolph’s glowing proboscis to help you A-B-see that Elwood goes after Eller because W comes after L, er, in the alphabet.

If I have a knock on Elwood, it’s that he checked in to the top spot on this checked list, taking the North Pole position. On this roll call, Eller is stellar.

Has anyone seen Santa? (Last I heard, an airline pilot spotted his sled on its way in from New York.) We must find him. St. Nick needs to nix this muddled list. I insist. He should drive it out to the middle of nowhere and leave it for dead — or sleigh it out to the middle of nowhere and slay it. Then he should make a new list, in alphabetical order. It’s what I want. I already have one of those stupid ties with his images on it.

Avoid similar Vacation daze this holiday season, readers, and may your vacation days be merry and bright. Have a holly, jolly Christmas!