A Miscarriage of Justice 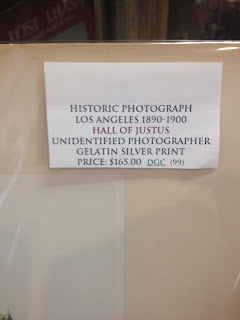 Just goes great with ice. Serving it on the rocks does it true justice. I think so. John Roberts thinks so too. And it’s not just us. (And it’s definitely not justus.) Noah Webster, George Merriam and Charles Merriam agree. Everyone agrees. Well, almost everyone.

While Christmas shopping, my friend Bret spotted this label on the back of a photograph at Pasadena Antique Mall in California. Bret noticed that justice had not been served. Instead, an odd-looking impostor had worked its way in.

“Seriously!” Bret said, nodding. “Where’s the justice in that?”*

The $165 photo depicts the Hall of Justice, a historic building in downtown Los Angeles. Charles Manson and Sirhan Sirhan were tried in its courtrooms, and the bodies of Marilyn Monroe and Robert F. Kennedy were autopsied in its coroner’s office. The building, which has been vacant since it suffered damage during the 1994 Northridge earthquake, often was used in establishing shots on the TV series Perry Mason.

Those who worked at the Hall of Justice were principled people who did what was right. They surely would have fixed the last word on the third line — a word that can’t be justified. It should be on ice, not spending time with us. Sure, justus sounds like justice, but the former isn’t a word. Its usage makes one look silly, uneducated. I suppose that’s … wait for it … phonetic justice.


* Parts (or all) of this dialogue may have been fabricated.

Interesting side note: Did you know that the other Hall of Justice — the headquarters for DC Comics’ animated Super Friends — was modeled after a real place? Cincinnati’s Union Terminal, a former train station that now houses a museum, inspired its large arch, twin pillars and water feature. The fictional Hall of Justice contains the Trouble Alert, which warns Superman, Batman, Aquaman, the Wonder Twins and their allies when something is wrong. Something like, say, justus.