New Year’s resolutions aren’t my cup of tea. I’ll make an exception today, as we near 2014. While others prepare for New Year’s bashes, I resolve to bash this Hilton Head Lakes ad, which dropped the ball three times before the ball dropped in Times Square. 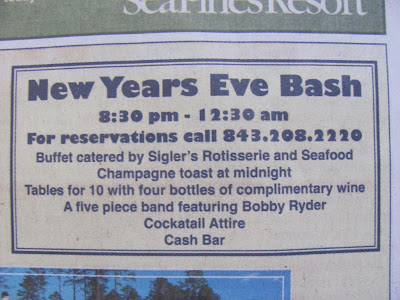 10, 9, 8, 7 … “New Years Eve” is missing an apostrophe and “five piece band” is missing a hyphen and cockatail is being followed — it has an a on its tail. (Is a cockatail a mixed drink served to small Australian parrots?)