A USA Today caption writer stepped in it. I suggest changes be made ASAP. That’s right — step on it! 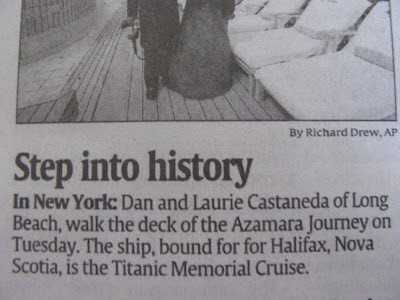 First up, the comma quandary in the first sentence. Do we have too many commas? Not enough commas? It’s difficult to say for certain without knowing the writer’s original intent.

If the writer felt the couple’s hometown was essential information, no commas are needed. Therefore, we must delete the comma after Beach.

Dan and Laurie Castaneda of Long Beach
walk the deck of the Azamara Journey on Tuesday.

If, however, the writer believed the material was not essential to the meaning of the sentence, commas must set off “of Long Beach.” That requires a second comma following Castaneda.

Dan and Laurie Castaneda, of Long Beach,
walk the deck of the Azamara Journey on Tuesday.

No commas? Acceptable. Two commas? Sure. One comma, after Beach? Nuh-uh. Because the phrase “of Long Beach” is not critical to the reader’s comprehension, I’d side with the two-comma backers in this case.

Next up, the repetition, I repeat, repetition in the second sentence. Are we building something aboard ship? I ask because we’ve got a “for by for” lumbering around the first half of the closing sentence. If I were construction foreman, I’d order my crew to take down half of that forbidden twosome. “Wood” you?

Finally, the mislabeling in the second sentence. No, the ship is not the Titanic Memorial Cruise. The ship is the Azamara Journey, as established in the opening sentence. The ship was on a Titanic Memorial Cruise, which commemorated the 100-year anniversary of the legendary ocean liner’s maiden, ill-fated voyage. Passengers, the Castanedas included, sailed to the exact spot in the North Atlantic Ocean where the Titanic went down.

I have a sinking feeling this photo caption would be better off buried at the bottom of the sea as well.