Tax Evasion in the Commonwealth 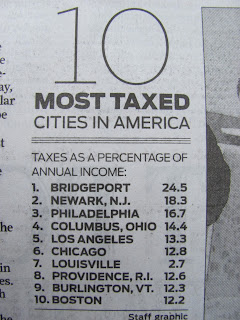 This list of the most taxed cities in America seems straightforward. Bridgeport, at No. 1, has the highest percentage, 24.5. No. 2 Newark has a lower percentage than Bridgeport (the Connecticut city that borders my hometown) but a higher percentage than No. 3 Philadelphia, and so on. Until we get to No. 7, that is. If Louisville’s taxes, as a percentage of annual income, are only 2.7, Kentucky’s largest city needs to move way down the list, far removed from the top 10 — and I need to move to Louisville!

Louisville must stay at No. 7, of course. What has to change is its percentage, which underwent some unforeseen tax cuts. Someone is missing. Or, to be more precise, some 1 is missing. Levy that lost digit and no one gets charged with tax fraud. Consider it a tax write-on, if you will.

I’m done. I won’t tax you with further puns, readers.