Joe Carter, a Toronto Blue Jays outfielder, hit a Game 6 walk-off home run against Philadelphia Phillies pitcher Mitch Williams to win the 1993 World Series. His historic homer, which came with one out, two strikes and two men on base in a game Toronto trailed 6-5, cemented Carter’s fame, especially north of the border. He will live in infamy, however, for something he was involved in the following season.

For six innings of a July 14, 1994, game against Texas, Carter sported an error as easy to spot as the CN Tower on the Toronto skyline. The five-time Major League Baseball All-Star played right field and batted cleanup as a member of TOROTNO. 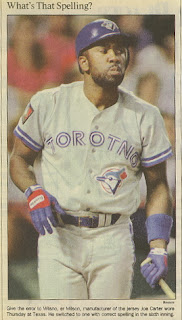 I’m on to you, Carter. You don’t have ONTO on your chest.

The ROT in the middle of Carter’s uniform led to rotten luck all around, or so it seems. Carter went hitless in four at-bats against the Rangers that mid-July day, and the Blue Jays lost the game 7-3. Less than a month later, MLB players went on strike, and the 1994 World Series was canceled. The Blue Jays haven’t won a World Series or so much as sniffed a postseason berth since Carter donned a uniform that was for the birds.

Toronto’s luck ran out when RON ran out. RON should run in the middle, after one TO and in front of another. Do we want Carter’s uniform TO ROT? NO!

A (musical) note: Carter is wearing a Blue Jays jersey, which we could slangily shorten to Jer-Z, which sounds a bit like Jay-Z, whose real name is Shawn Corey ... wait for it ... Carter. If I were Carter (Joe, that is), I’d do as Jay-Z suggested on The Black Album and “Change Clothes.” I’m not talking about a “Suit & Tie.” Put on a TORONTO uniform. I’d be “Crazy in Love” with that.
Posted by Owen at 8:00 AM