I’ve come across what may be a typo in the 2012 John Patterson novel Private Games, which is about the murder of a high-ranking Olympic official hours before the opening of the 2012 Games in London.

Check out the first sentence in the photo. It’s from the last page of Chapter 15. 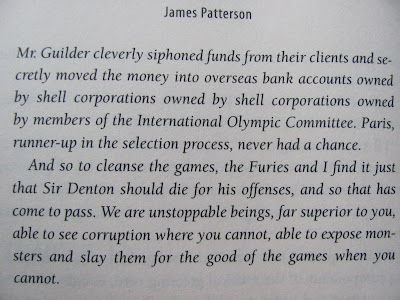 I could be mistaken, but I think the repeat of “owned by shell corporations” was unintentional. Perhaps it’s not a typo and Patterson meant to show just how deep the money trail went by having shell corporations, sometimes referred to as front companies or mailbox companies, own other shell corporations. I doubt it though. I’m guessing IOC members owned shell corporations that owned overseas bank accounts — three levels of illegal activity, not four.

If I’m right and this is an error, it’s difficult to fault the publisher, Little, Brown and Company. Patterson is a one-man assembly line, pumping out best seller after best seller at a breakneck pace. You try keeping up with all those drafts!

If I’m wrong and this isn’t an error, I shell out a public apology, Mr. Patterson.