A Hunger for Katniss 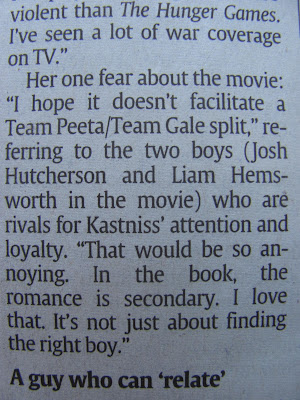 Fans of Suzanne Collins' dystopian trilogy in which children are forced to fight to the death on television devoured the first novel, The Hunger Games, in days, if not hours. I'm sure the eagle-eyed Katniss Everdeen worshippers among them will have no trouble spotting the error in this blurb from a USA Today article about the movie version of the book.

If you've targeted the third word on the paragraph's seventh line with the last arrow in your quiver, you've nailed it. I bow to you for your expert bow work.

The writer and editor are Catching Fire today for misspelling the first name of the trilogy's heroine, played on the big screen by Jennifer Lawrence. Against its will, an s from District 12 has been uprooted and forced to participate in the name of the Games. It's fighting for its survival, but I don't foresee a happy ending.

Blame it on the Capitol!
Posted by Owen at 8:00 AM