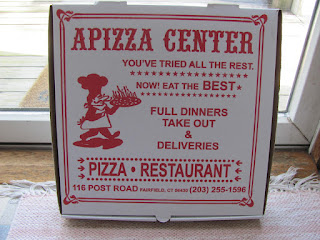 Now and then, I have pizza for dinner. Last night I ordered one with my go-to topping, bacon. The doughy, cheesy, meaty contents of this box were quite tasty. The box itself, however, failed to deliver.

A certain three-letter word doesn't deserve its own punctuation. It's but one piece of a four-word sentence. That exclamation point following NOW is at the wrong point in this box-top sentence. In its current position, it's pointless — any way you slice it.

So, thinking outside the box, I suggest we put that emphatic punctuation mark where it belongs: at the end of the sentence. Let's do it. Now!
Posted by Owen at 8:00 AM