No Icing on This Cake 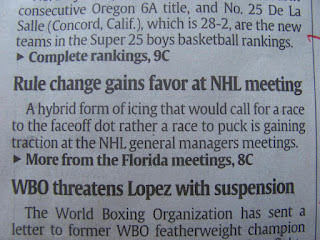 Are all of my readers familiar with icing? I'm not talking about the sugar-based frosting on cakes, cookies and other baked goods. I'm referring to the hockey term. Icing occurs when a player shoots the puck from behind the red line at center ice and it crosses the opposing goal line. It's considered a delaying tactic, and if an opposing player touches the puck first, the game is stopped and a face-off takes place in the offending team's defensive zone.

Icing is a minor infraction, as is the one that has occurred in this blurb. The writer raced through his assignment and, in doing so, iced a couple of words. The sentence, like a hockey team with one or more players in the penalty box, is shorthanded. We're skating on thin ice if we fail to include than after rather and the before puck.

It's a shame the writer didn't omit another word. He would have registered a hat trick, in hockey lingo.
Posted by Owen at 8:00 AM