Last season Alabama and LSU, two of the nation’s top college football teams, played on Nov. 3. Despite the “this game’s so nice, let’s play it twice” declaration in the TV listings pictured below, no Round 2 was scheduled for five days later. The only way the Crimson Tide and Tigers would have played again on Nov. 8 is if the game were an instant classic that aired on the fittingly named ESPN Classic. In a sense, it was: Alabama’s quarterback, AJ McCarron, shook off a terrible second half to lead his team down the field when it mattered most, tossing a 28-yard touchdown with less than a minute remaining to give the top-ranked Crimson Tide a 21-17 road victory against the fifth-ranked Tigers. LSU was stunned. McCarron was overcome. He sobbed on the bench and, when the game ended, rushed into the arms of his dad, who was in the stands. Alabama proceeded to win its second straight national title and third in four seasons. 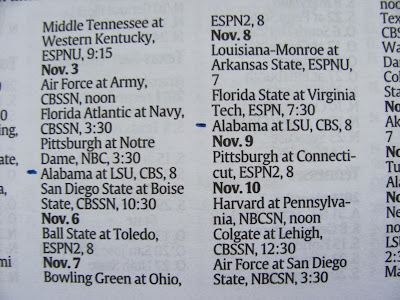 Your only opportunity to watch these two powerhouse programs clash this season comes when Alabama hosts LSU this Saturday, Nov. 9, at 8 p.m. ET on CBS. I urge you not to take five … days, that is. If you tune in at 8 p.m. on Nov. 14, you’ll see a new episode of The Big Bang Theory titled “The Itchy Brain Simulation” in which Penny (Kaley Cuoco) confronts Raj’s (Kunal Nayyar) ex-girlfriend, Lucy (Kate Micucci).

College football is my favorite sport. The Big Bang Theory is my favorite current show. On my TV calendar, therefore, Nov. 9 and Nov. 14 are hot dates. I go from football to photons. From a physical game to physical science. From receivers in motion to particles in motion. From Alabama-LSU to Caltech.

By the way, actress Kate Micucci is also one half of the comedic folk-rock duo Garfunkel and Oates, and she co-wrote the sweet, clever love song “If I Didn’t Have You (Bernadette’s Song)” that Howard (Simon Helberg) performed on the Oct. 24 episode called “The Romance Resonance.” You can check out Howard’s romantic gesture below and, if interested, download the song from iTunes or Amazon.com. The ode to Bernadette has been released in support of the charity MusiCares.


Remember: If you want to see Alabama play LSU, Nov. 14 is five days late. Only one game is on the slate, so don’t wait. Mark the date.