When it comes to Wilt Chamberlain, what number impresses you most? If you’re vertically challenged, it might be his height: 85 inches. If you’re most familiar with Wilt Chamberlain, lothario, it’s likely the more than 20,000 women he claimed to have bedded. If you know him as Wilt Chamberlain, basketball player, it’s probably the 100 points he scored in a single game, in 1962. I’d argue it’s the 27.2 rebounds, or boards, he averaged per game during the 1960-61 season. No NBA player in the past 40 years has averaged even 20. In a game against the Boston Celtics that season, Chamberlain pulled down an NBA-record 55 rebounds. Fifty-five! Amazing! 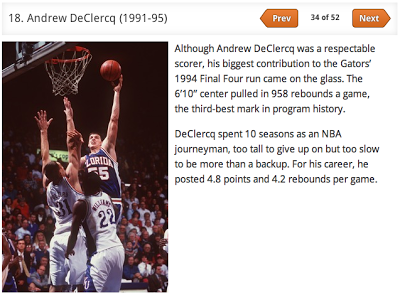 Late one night Chris, a friend and former college roommate, sent me a link to an old article about the top 50 basketball players from our alma mater. At No. 18 on the rundown from Bleacher Report, a sports website, was Andrew DeClercq, a hustling big man who helped the University of Florida “find a way”* to the Final Four in 1994 before spending a decade in the NBA.

In the annals of college basketball, DeClercq, the chairman of the boards, has gotten DeShaft. He grabbed 958 rebounds a game! Even on his best day, Chamberlain managed only 5.7 percent of DeClercq’s average. Why is DeClercq not in the Hall of Fame? Why is he not mentioned in the same breath as Chamberlain and Bill Russell?

I’ll tell you why: DeClercq had 958 total rebounds in his four-year career, which lasted 128 games. That’s a per-game average of 7.5. When “a game” is inserted, DeClercq’s per-game mark jumps 950.5 rebounds. Yikes. I hope the Bleacher Report writer rebounds from this error.

Chris and I were teammates on the Ruthless Posse, a UF intramural basketball team, in the ‘90s. In four seasons together, we failed to win an intramural tournament title. In hindsight, our lack of success is attributable to Chris, a frontcourt player. Had he grabbed 958 rebounds a game — heck, had he slacked off and pulled in only half that amount — we’d have multiple intramural trophies in our cases today.


* Fans of the 1993-94 Florida team will understand why I chose this particular phrase.