I suppose it’s possible, with an unprecedented run of penalties, for a football team to be in a 1st-and-991 situation. Possible, but highly unlikely. Even if a team is penalized or sacked, it rarely has to go more than 20-something yards to get a first down. 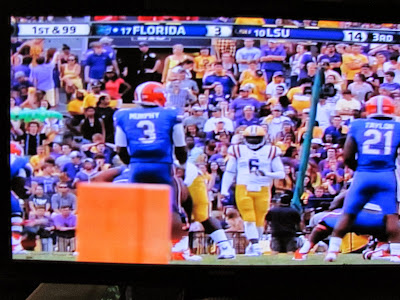 You won’t be surprised, then, to learn that Florida, my alma mater, did not face 1st and 99 in a recent game against LSU. It was a graphic tease, if you will, and I wish the person in charge had treated 99 like a wild animal and kept his distance. To be fair, because my beloved Gators have a conservative, boring R2-P22 offense, with its affinity for RUM3 and disinclination to work the forward pass into the game plan, at times 1st and 10 can feel like 1st and 99. (Did somebody break into the Florida football offices? The team’s playbook is missing its “Passing” chapter.)

I’ve popped the idea of 1st and 99 like a luftballon, but if any team knows about a l-o-n-g down and distance, it’s my team.

Can comedy and horror coexist? They can. They did, back in September 2000. Undefeated Florida, ranked third nationally, faced unranked Mississippi State in Starkville, Mississippi. Trailing 31-23 early in the final quarter, the Gators had a first down at midfield. Center David Jorgensen snapped the ball and, like a speech bubble or umbrella, it went over quarterback Rex Grossman’s head. Grossman tried unsuccessfully to pick it up before falling on it at the 21-yard line — loss of 29. It was déjà vu on second down; Jorgensen sailed another ball over Grossman’s head on a play the announcer equated to something out of The Twilight Zone. Grossman recovered the ball but was tackled at the 3-yard line before he could get off a pass — loss of 18.

In the span of two plays, the Gators went from 1st and 10 to 3rd and 57. Fifty-seven! Knowing it’d require a minor miracle to convert under such extreme circumstances, Florida coach Steve Spurrier backed down on third down. Grossman took the snap and ran out the back of the end zone for a safety. Florida lost 47-35, snapping a 72-game winning streak against unranked opponents that was the nation’s longest at the time.

You can watch Florida go the distance — or attempt to, anyway — in the YouTube video below. If you’re a Gators fan, be forewarned: The video contains suggestive teams, violent snaps, partial abnormality, strong ineffectual content, graphic ineptitude — the whole nine(ty-nine) yards. It may cause depression, hair loss, headaches, nausea, night terrors, Tourette’s syndrome or severe trauma. Proceed at your own risk.

The comedy of errors was a horror show that made Cujo look like Air Bud. It’s not every day, after all, that a team needs to gain 57 yards — more than half a football field — to get a first down. The longest distance you’ll see in a typical game is, as I mentioned in the opening paragraph, 20-something yards. Distances in the 30s and 40s do occur, though rarely, and we know 57 is possible. But 99?

2 Years ago I coined the term R2-P2. It stands for run-run-pass-punt, a predictable and unimaginative approach taken by many football teams. R2-P2 is offensive anemia. I’ll break it down for you: On first down, Florida runs, usually for little or no gain. On second down, Florida runs again … usually for little or no gain. On 3rd-and-long, against a defense that knows what’s coming and often blitzes, Florida attempts to pass. On fourth down, following an incomplete pass or a sack on third down, Florida punts. R2-D2 worked his magic countless times; R2-P2 doesn’t work.

3 Not only are R2-P2 teams enamored with running on first and second down; they often prefer RUM — running up the middle. RUM works as often as goats during a government shutdown4, yet it’s the go-to play for many teams. You could say that teams that indulge their taste for RUM have a serious drinking problem. So might some of the fans forced to watch said teams. A ground-and-pound team that runs (and runs and runs and runs) up the gut can do irreparable damage to a fan’s liver.

4 When the U.S. federal government shut down last month, approximately 25 hungry goats at the Gateway National Recreation Area in Sandy Hook, New Jersey, lost their “jobs.” The herd, which was clearing invasive poison ivy at the park, was sent home to Upstate New York.
Posted by Owen at 8:00 AM