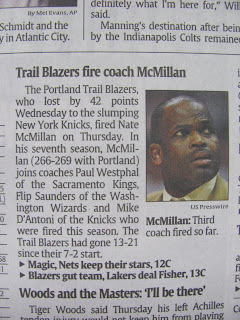 As this article states, Portland fired Nate McMillan. The other members of the "firing squad," according to the story, are Paul Westphal, Flip Saunders and Mike D'Antoni. Counting aloud, I come up with four fired coaches. [Owen looks at his hand, muttering to himself.] Just double-checked my math. Yep, it's four.

So, what's with the caption? Is McMillan the third or fourth coach to be fired? The numbers don't mesh.

Turns out, the caption is correct. The article, therefore, must come under fire.

When McMillan, of the Trail Blazers, was fired, he hit the trail blazed by Westphal and Saunders, who were given the pink slip two months earlier. But the writer fired blanks when he listed D'Antoni as a canned coach. Pull him out of the fire! D'Antoni was not fired. He resigned. That revelation sparked today's post.