Today’s typo, which I came across in an old Deadspin story while doing research for a separate post, has me craving Kung Pao chicken, moo goo gai pan and other dishes from a certain popular Chinese restaurant. Why? Because this 2010 North Carolina State baseball media guide is in desperate need of a PF change. 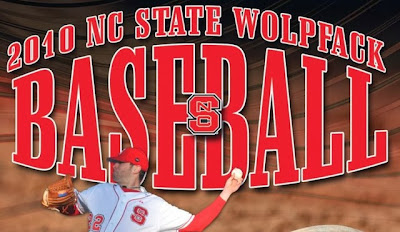 The NC State athletics administration blew its cover, literally. Can’t find the big, bad error? Stalk your prey into the upper-right corner and you’ll discover something that really packs a punch. Whoever put that word on the BALL wasn’t, um, on the ball.

W, O and L — the leaders of the Wolfpack — are a howling success. It’s at this point, however, that the lineup crumbles. The cleanup letter and the one on deck are, like the whole trial in …And Justice for All, out of order. The transposed letters stick out like a long, sharp canine in this dog-eat-dog world.

The 2010 NC State baseball team, which finished 38-24, made 102 errors in 2,403 chances (.958 fielding percentage). The team’s media relations office made one error in five chances (.800) on the cover — and it was a whopper, akin to dropping an easy pop fly while nursing a one-run lead with two outs and the bases loaded in the ninth inning.

Wolp packs a wallop. We don’t need a full moon to realize that if it were wolf, the word would transform into something meaningful. The lesson? Mixing your P’s and F’s can create all sorts of paux fas, er, faux pas. Editors can eliminate such blunders. We are, after all, quite helfpul.
Posted by Owen at 8:00 AM